Most of these studies compared the East Asian eyelids with that of the Caucasians.

In East Asians, the muscles that open the eyelids (levator palpebrae) are inserted into the skin of the eyelids at a lower site than in the Caucasians. Depending on the site and amount of insertions, the double eyelids may be absent, indistinct or present. In addition, the fat compartments in East Asians are more protruded which explains a fuller upper eyelids. In Caucasians (and other races), the muscles that open the eyelis are inserted into the skin at a higher site and more firmly so that their double eyelids appear higher and more distinct. The fat compartments in Caucasian are confined to a more posterior position whcih accounts for their eyes appearing deeper and sunken. 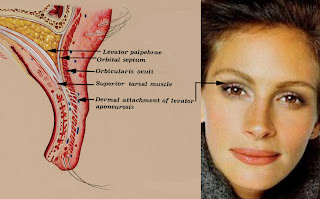