The following news reminded me of a case in my clinic recently: a 26-year old patient who wanted to look like a Chinese film star underwent 4 eyelid operations by the same plastic surgeon: 2X double eyelid surgery, 1X epicanthoplasty and 1X brow lift. She showed me the picture of the film star and said she was unhappy because the surgeon did not achieve the results she wanted. She wanted me to widen her double eyelids further. While the surgery involved only removal of some loose skin I was reluctant to comply because of her demanding and pedantic behaviour. I was of the opinion that if the result were not 100% perfect, she would blame me for all the imperfections from the pervious operations. I politely asked her to see her plastic surgeon for correction. There is a saying in medical profession: "It takes 10 years to learn how to operate and another 10 years to learn when not to operate."
.
.

SINGAPORE - A Singaporean permanent resident is demanding that her double eyelid surgeon refund her the $16,000 she spent on double eyelid surgery that she claims resulted in uneven eyelids.
According to Shin Min Daily, Miss Sun, 37, who is originally from China, said that because her natural eyelids are not beautiful, she went for four double eyelid surgeries from 1992 to 2010.
After having been operated on, she felt that there was an improvement, but still believed there were certain flaws that she was dissatisfied with. Hence, on April last year, she forked out $16,000 for a prominent plastic surgeon here to do her fifth surgery.

However, before the doctor removed the stitches, she discovered that the surgery appeared to have gone wrong. Her eyes looked uneven and the widths of the double eyelids were different.

The doctor then assured her that it takes time for the wound to recover, and told her to do physical therapy. In the end, the surgery still ended up a failure, she lamented.
Miss Sun is now demanding a full refund, but the doctor is only willing to return $6,400 to her.
"I am not satisfied. I had an appointment with the doctor to meet at 8am to discuss the situation. I arrived 10 minutes late, and the doctor's assistant said the doctor is at a surgery and has no time to see me. This is not sincerity," she told Wanbao.
Miss Sun said she then opted to wait at the clinic, but was driven away by security called in by the clinic.
After explaining to the security officers the reason why she was waiting at the clinic, she said they eventually allowed her to stay.
However, the clinic resorted to calling the police instead, she claimed.
The police have confirmed that they have received complaints regarding this dispute, and have explained to the relevant parties on what legal action is available to them.
. 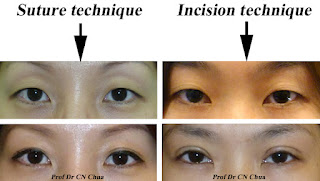 The pictures were taken before and ten days after double eyelid surgery.
The patient who underwent incision technique still had some swelling
whereas the suture technique patient had little swelling.
Posted by Chua Chung Nen at 10:18 PM 2 comments: 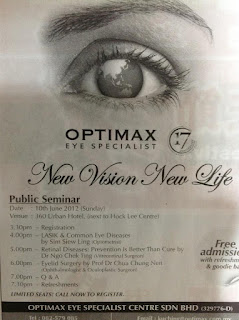 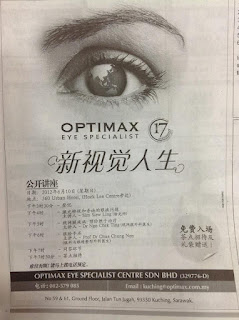 Posted by Chua Chung Nen at 6:14 PM No comments: