This patient complained of problems opening his eyes. He gave a history of recurrent eye blinking which was diagnosed as benign essential blepharospasm by a neurologist. He was given botox treatment at 3-monthly interval, which abolished the spasm. However, he still found it difficult to open his eyes voluntarily. A diagnosis of apraxia of lid opening was made.

Problem with lid opening despite treatment
for blepharospasm.

Benign essential blepharospasm is a neurological condition of unknown cause (see video below). The affected patient has recurrent spasms of the eye muscles (orbicularis oculi) causing lid closure. This condition may last for periods varying from seconds to minutes and often occurs repeatedly. The severity can range from mild to severe. Severe cases can seriously affect visual functions such as driving.

Apraxia of lid opening (ALO) refers to a neurological condition in which patient who has otherwise normal eyelid muscle (levator) has problem opening the eye once they are shut. The cause is unknown in most cases but may be seen in patients with Parkinson's disease or neurodegenerative conditions. This condition sometime co-exists with blepharospasm and may be mis-diagnosed. A blepharospasm patient with ALO will typically have spasms that close the eyelids but when the spasm stop, the patient is unable to open the eyelids for a few seconds or longer. Several treatment options are available for ALO in the presence of blepharospasm and these include:
a. more botox injection to abolish all the blepharospasm but excessive botox injection is in itself associated with inducing ptosis;
b. myectomy in which nearly all the orbicularis muscle is surgically removed but this surgery is associated with prolonged recovery and unpredictable cosmetic result  and
c. frontalis suspension in which the muscles of the forehead are used to open the eyes.

After discussing the various options, the patient underwent frontalis suspension and had a good result. 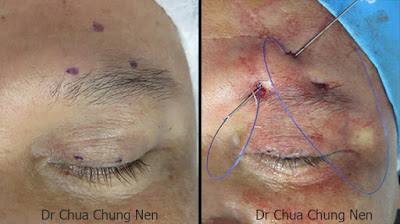 Frontalis suspension was done with 2/0 prolene. 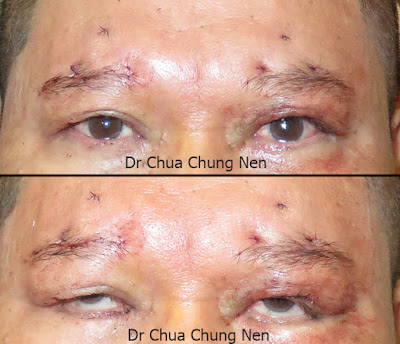 Immediate post surgery. Top with the eyes open and bottom with the eyes closing
showing problems with lid closure which usually improved
after a week to 10 days.