Most people assume oculoplastic surgeons deal mainly with patients who are vain as shown by this humourous poem below (from Survey of Ophthalmology).

As I study now to be an eye MD,
I ask what kind of doc I want to be.
It is a rather daunting question
That raises fear and apprehension,

As each eye part has its own specialty!
Should retina be the field in which I train
To find a tear or subtle new membrane?
But I seem to give my patients aches
When I indent to find their breaks
And that just makes for too much mental strain.

Perhaps it should be neuro-ophthalmology:
The optic nerve, its path, and its pathology.
But when there’s pallor, one asks Why?
With CT, PET, and MRI …
So why not just go into radiology?

My surgery could be limited to refractive.
I’d soon build up a practice, very active.
Though YAGs and excimers do magic
The odd myopic surprise is tragic:
On balance this may not be so attractive.

Then how about procedures oculoplastic
On skin that is no longer so elastic?
But operative hours are long (a pain),
And patients they are, oh, so vain.
It’s hard not to say something too sarcastic.
Perhaps glaucoma is the field to choose,
Though pressures, fields, and angles do confuse:
Does pressure cause the nerves to die,
Or sick nerves yield when pressure’s high?
I’d like a field where fewer patients lose.

Strabismus is another possibility,
To repair defects in the eye’s motility.
But waiting rooms with children crying
Would, in time, become quite trying
(From residency right through to my senility).

With so much then to learn, is it reality
To limit oneself to only one modality?
The eye is wondrous and diverse!
I think I’ll embrace, for better or worse,
The field of ophthalmology in totality.


Although most of my private patients are concerned with double eyelids and eyebags; a large proportion of my patients seen in the Sarawak General Hospital are concerned with non-cosmetic eyelid conditions such as eyelid tumours and eyelid malpositions referred from all over Sarawak. A recent example is this patient who developed a right cicatricial ectropion (retraction of the eyelid as a result of scarring) after facial infection.

Retraction of the left lower eyelid as a result
of facial scarring. 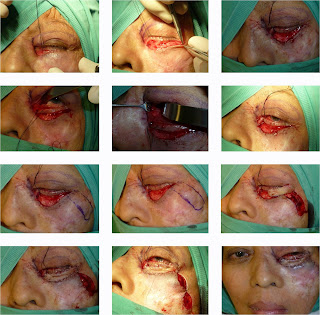 Steps used to correct the retraction.

Appearance of the eyelids at second week
post-operative.

Posted by Chua Chung Nen at 9:24 PM No comments:

Doctor, Why are My Double Eyelids Unequal? Part III

This woman underwent a double eyelid surgery in a beauty saloon. Unfortunately, the left double eyelid appeared lower than the right (right picture). She went back to look for the "surgeon" but was told that she had returned to China without forwarding address or telephone. Examination showed that more skin had been removed in the right than the left eye. Revision was carried out by removing the excess left upper eyelid skin.

Doctor, Why Are My Double Eyelids Unequal? Part II

As mentioned in the previous blog double eyelid (skin crease) asymmetry is one of the most common complaints from the patients undergoing double eyelid surgery. Unequal skin markings before the operations is an important cause of the asymmetry and to avoid this:

a.  It is important to mark the skin prior to any anaesthetic injections to avoid distortion of the tissue.

b. In addition, double eyelid surgery should be postponed if there is any eyelid swelling which again can distort the tissue for symmetrical markings.

c. During the markings, the measurement should be precise and ideally a caliper (as shown in the picture) should be used rather than a ruler.

d. Another important thing to remember during markings is to ensure that the skin of the eyelids are under equal tension (see pictures below). 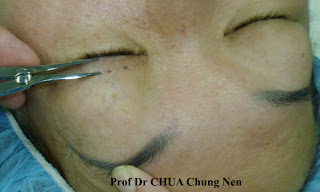 The marking is done with a caliper with the eyelid skin
under tension by pulling on the eyebrow. 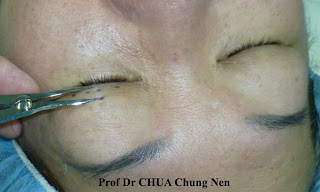 Marking with a caliper with the eyelid relaxed. Note that the
marking, even though marked at 6mm as the picture above,
produce a line higher than when the skin is under tension.
Posted by Chua Chung Nen at 10:13 AM No comments:

Doctor, why are my new double eyelids unequal? 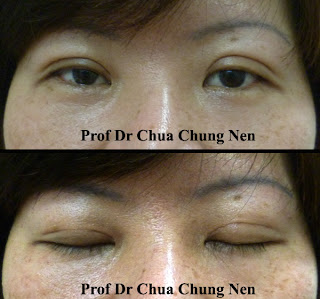 This 38 year-old underwent double eyelid surgery in a beauty saloon using the suture technique. The procedure was performed by a "doctor" from China of dubious qualification. Post-operatively, she noticed significant unequal double eyelids. Despite repeated reassurance from the beauty saloon owner, the asymmetry remained 8-week post-operative. Unfortunately, the surgeon had since gone and could not be contacted.

The three possible causes of this deformity noted were:


a.       The difference in measuring and marking the skin for suturing or incision


b.      Different skin tension while doing supratarsal fixation and

Posted by Chua Chung Nen at 3:55 PM No comments: