Droopy eyelid is a common condition that can affect the vision by occluding the visual field. However, the term droopy eyelid can mean different things to different patients. Therefore, whenever I receive an email or a phone call "Doc, I got droopy eyelids can you remove the skin for me?" I always insist the patient must come for a full consultation before I can decide which surgical technique to use. The two most common causes of droopy eyelids are:

a. excess upper eyelid skin that hangs over the eyelid margins to cover the visual fields; medically this is called dermatochalasis.

b. poor lid opening caused by problem with the muscle (levator) that open the eye; medically this is called ptosis.

In dermatochalsis (excess upper eyelid skin), the correction is by removing the excess skin. In ptosis (poor eye opening), the correction is aim at strengthening the muscle that open the eyes ie. the levator. An easy way of differentiating the two is to gently lift up the excess upper eyelid; if the eye under the skin is open normally then the cause of the droopy eyelid is excess skin (see picture below).

This patient complains of droop eyelid. By gently lifting the skin of the upper eyelid,
the eye opening is normal. Therefore, he has excess skin (dermatochalasis)
as the cause of his droopy eyelid.

The following pictures show six patients who complained about droopy eyelids. Can you identify which one has excess skin (dermatochalasis) and which one has lid opening problem (ptosis)? 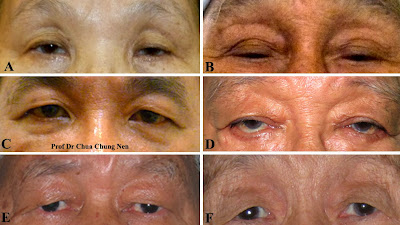 The following pictures show the pre- and postoperative photos of patients have had corrections of their droopy eyelids. 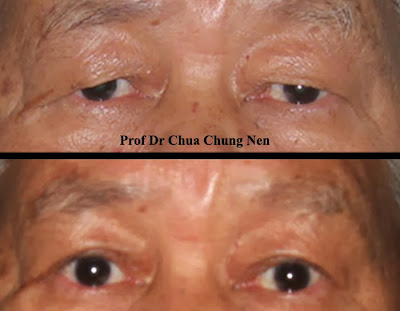 This patients had dermatochalasis. The excess skin was removed. 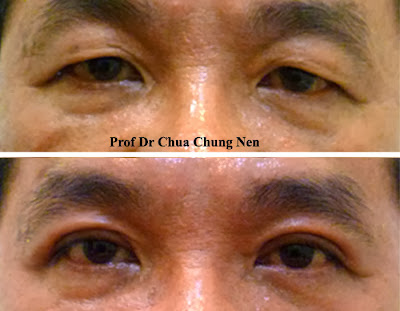 Another patient with dermatochalasis. The postoperative
photo was taken three weeks after the operation. 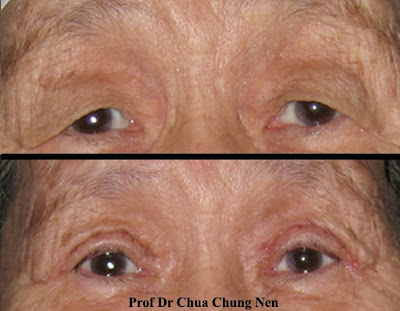 An elderly woman who has had problem driving because of excess skin
that is interfering with her visual fields. I performed bilateral
upper blepharoplasty. The photo below was
taken one week after the operation. 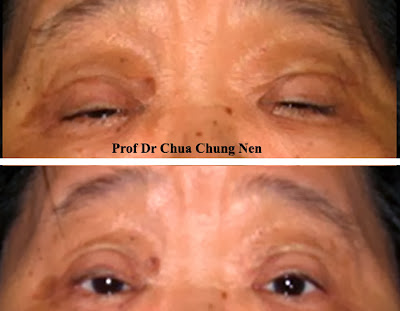 This patient came to me after having her excess skin in the upper lids removed
by a plastic surgeon six months earlier. Despite the operation, she complained
that she was unable to open her eyes. Examination revealed that her droopy
eyelids were caused by poor function of the muscles that open the eyes.
I performed  bilateral levator resection to open the eyelids. 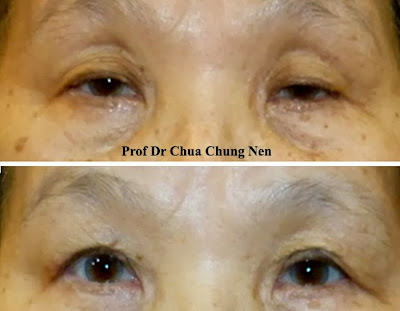 A patient complained of droopy left eyelid. She has ptosis in both eyes
but more obvious in the left eye. I performed bilateral mullerectomy.
The photo below was taken three weeks later. 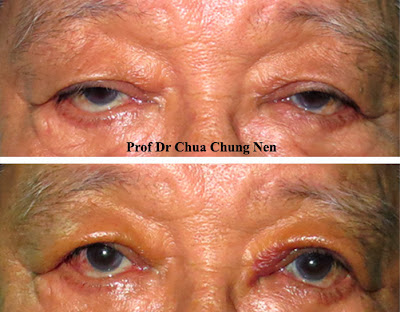 A patient who has bilateral ptosis and dermatochalasis. As the main
concern of this patient was poor lid opening, I performed Muller
muscle plication to open his eyes. The postoperative
picture was taken 3 days later. 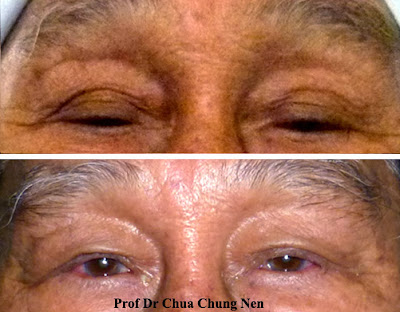 A patient with bilateral significant ptosis. Bilateral mullerectomy was performed.
The postoperative picture was taken at one month.

Posted by Chua Chung Nen at 6:02 PM No comments: 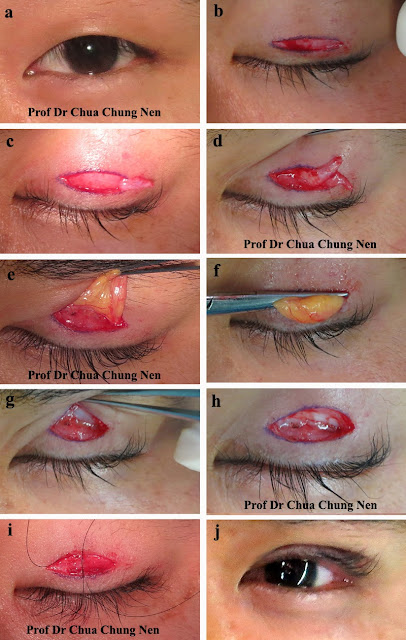 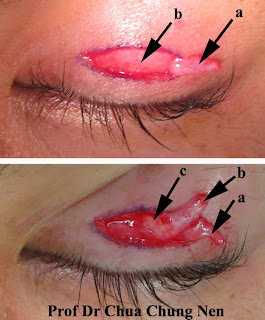 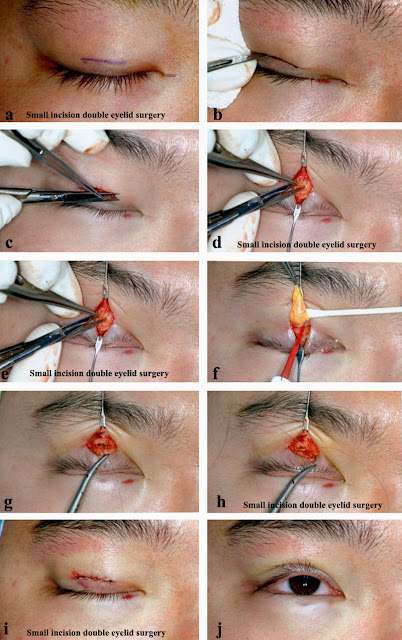 a. After deciding on the desired height for the double eyelid, a horizontal line of about 10mm is drawn on the skin;
b. The skin is incised to expose the underlying muscle; c. the muscle is trimed to expose d. the orbital septum;
e. the orbital septum is in turn open to expose f. the fat which is removed to reveal the underlying g. levator aponeurosis; h. the orbicularis is sutured to the aponeurosis at a few points; i. the skin is closed with nylon suture;
j. at the end of the operation. 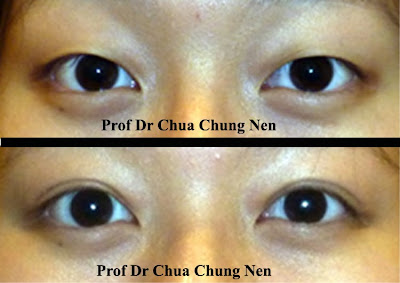 Before (picture above) and 6 weeks after small incision double eyelid surgery.
Posted by Chua Chung Nen at 8:49 AM 1 comment: