The first double eyelid surgery was recorded in Mikamo K. A technique in the double eyelid operation. J Chugaishinpo 1896. Mikamo was a Japanese surgeon who thought his patients with single eyelids appeared dull and unable to reveal their emotions, whereas those with double eyelids appear energetic and expressive. He observed that double eyelid can be formed through scar formation from procedures performed for entropion of the upper eyelid (inturning of the eyelid resulting in eyelashes rubbing on the cornea). He used 4/0 silk to make 3 ligations as shown in the pictures below to induce the formation of the double eyelid. Many suture techniques used nowaday are a variant of his technique.
The patient shown here was taken from his original article and she had asymmetrical skin creases with absent double eyelid in the right eye (arrowed). After the procedure, she developed double eyelid as shown. The pre and postoperative pictures were presented in a right to left fashion because the Japanese wrote from right to left. 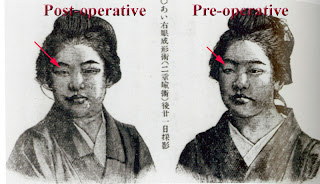 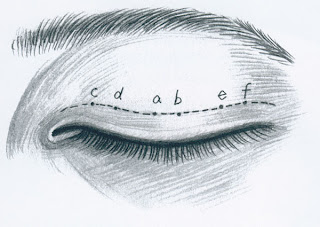 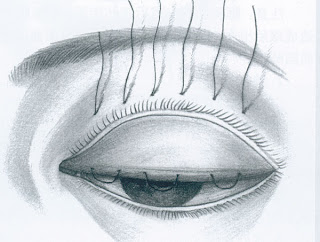 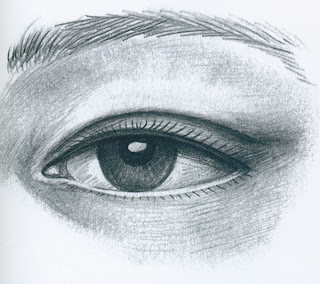