My Beautician Told Me I Got Funny Eyelid

This woman went to a hair saloon for a hair wash and the beautician told her that she can fixed her left droopy eyelid which she had had since birth (congenital ptosis). The beautician apparently believed that the problem was caused by the lack of skin crease and that the creation of a double eyelid would solve the problem and made her good looking.

However, what this woman had was a weak muscle resulting in failure to lift the left eye. As her muscle function was poor the only way to get it working would be to create a connection between the forehead muscle (frontalis) and the muscle that lift the eyelid (levator muscle) using a procedure called frontalis suspension as shown in the picture which I performed on a 10 year-old boy. 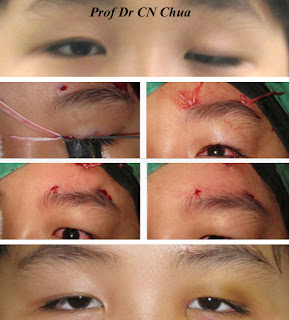 Unfortunately, the woman could not resist the temptation of appearing good and paid 2000 ringits to have sutures put into her left upper eyelid. Not only was the double eyelid failed to appear (as a result of the weak muscle) but the eyelid was not lifted (which was not surprising as the problem was not the lack of double eyelid). She went back to the beautician two weeks later and complained about the failed procedure. Instead of admitting her failed surgery due to her ignorance of the eyelid anatomy, the beautician scolded the patient:” I have done hundreds of this operation, and they all work wonderfully. You are the only one that fails to work. It must be something wrong with your eyelid! So don’t come back and complain to me!”

The poor woman readily believed the beautician until she met one of my patients who told her that the eyelid could be lifted by an eye surgeon. I performed the procedure using 2/0 prolene suture to connect the eyelid to the forehead muscle. Postoperatively, the patient was happy with her appearance.

Lesson of the story: “ If you want to have invasive procedure done to your eyelid by unqualified personnel, be prepared to be scolded if thing does not go well”.