How the Excess Upper Eyelid (Dermatochalasis) was Removed

Excess skin of the upper eyelids (dermatochalasis) is a common ageing process. It makes a person appears dull and in severe cases can interfere with vision. The practice of removing the excess skin has been recorded in Egyptian papyrus 3000 years ago. However, with the lack of anaesthesia the procedure was very painful and few patients could bear to go under the knives. One way of overcoming the pain was illustrated in the book Ophthalmodouleia by the famous German eye surgeon Georg Bartisch (1535–1607). In this method, the excess skin was clamped between two rods until the skin died and dropped off which usually took a few weeks. 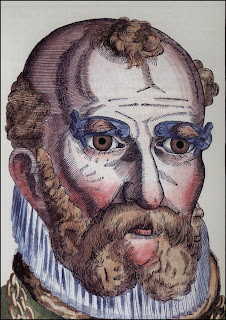 In the book, the process was described: "The excess skin to be removed is put through the screw clamp and clamped. St. John's wort oil is applied one or twice a day to help the skin comes off quicker and heals. The clamp will fal off in three to four weeks time."

Fortunately we not longer need to use this laborious method. Below show the steps I used to remove excess upper eyelid skin and a few post-operative patients.

This woman has excess upper eyelid skin making her appears tired.
Before the operation, the excess skin is measured with a ruler.

The height of the double eyelid (skin crease) is measured and
shown to the patient with a mirror.

The amount of skin to be removed and the height of the
double eyelids (skin creases) are marked.

The excess skin togther with some muscles and fat are removed.

The amout of skin, muscles and fat removed should be the same
on both sides. The double eyelids (skin creases) should be
assessed constantly during operation to make sure they
are of the same heights.

After making sure the heights of the double eyelids (skin creases) are
the same, the skin is stitched up. Firm patching is applied to reduce
post-operative swelling.

Appearance of the eye the second day after operation and
one week later.

Here are three more patients who had had upper eyelid exess skin removed. The procedure not only makes them see better but looks younger. 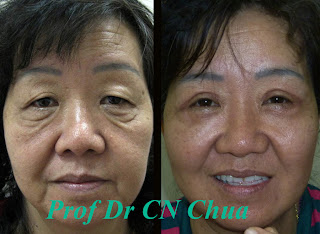 This patient had upper and lower eyelid excess skin were removed.
Before and 2 weeks after operation. 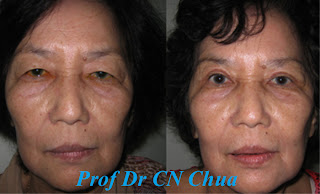 This patient appears more friendly after the procedure.
Before and 3 weeks after operation. 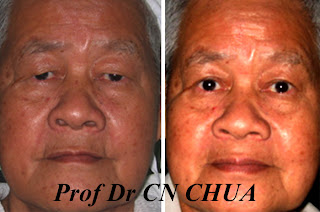 This patient sees better without having to constantly lift his head.
Before and 3 weeks after operation.
Posted by Chua Chung Nen at 5:39 PM