The Double Eyelids My Friend Gave Me

It never ceases to amaze me the number of gullible people who are willing to let unlicensed or unqualified personnels (usually beauticians) to perform invasive procedures on their faces. Many of these people will haggle from dawn to dusk over some faked cheap LV bags but will never think twice of handling over a few thousands ringgits to some quacks to have their faces butchered. Not only are these centres unqualified, they do not have the necessary hygiene standard as demanded by the Health Department. Further more, if anything went wrong these personnels usually deny any responsibilities and they don't any means of rectifying the problems. As an oculoplastic surgeon, I have come across a number of botched jobs by these unqualified personnels. When asked why they went to these dubious centres, these unfortunate souls usually said their friends or their friends’ friends say so and so can guarantee to make them beautiful. Some of these botched jobs are beyond repairs like those with distorted facial features from silicone or paraffin injection.
This woman came to see me two months ago as she had had botched double eyelid performed by her beautician friend two years ago. Apparently, her friend acquired the techniques of performing double eyelid using sutures (more on the techniques of double eyelid surgery later) from a visiting doctor from China (also not licensed to practise in Malaysia). As a friendly gesture, the beautician offered her half price to have the procedure performed in the beauty saloon. The result was the lopsided double eyelids seen here. 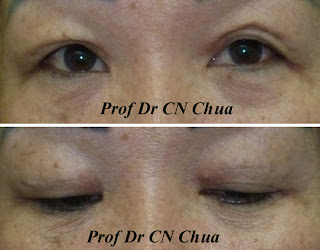 Her friend reassured her that time will heal everything but time only left her the scars that she lived to regret. I performed revisional blepharoplasty on her and cut out all the scarred tissues caused by the sutures. The excised skin showed numerous sutures which were placed in a haphazard manner indicating the operator was not skilled to perform the procedure. Postoperatively, the two eyelids appear symmetrical and for the first time in two years that she would go into the public without sunglasses. 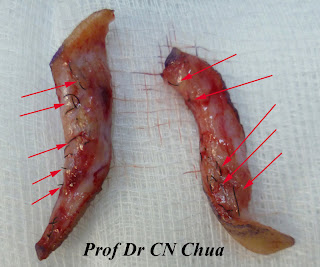 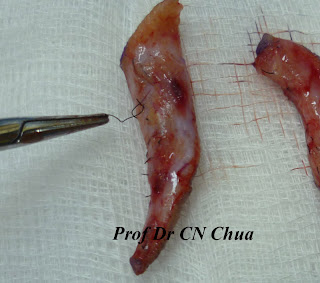 Sutures pulled out from the excised skin.

Symmetrical skin creases at the conclusion of the revision. 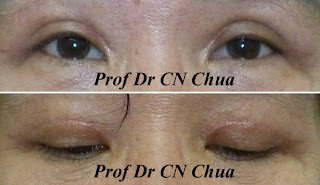 The appearance of the eyes at 4 weeks.