Doc, can you do anything to my son's eyes to stop the bullying ?

Children are cruel and often like to bully their classmates who have facial imperfection despite the threat of punishments from school authorities. This boy had been bullied for many years because of his droopy eyelids and right squinting eye (he has an exotropia in which the eye turns out).

Bilateral droopy eyelis and a right eye that turns out.

His mother noticed that his school performance has been deteriorating steadily due to the bullying. She enquired if anything could be done to correct the defects. Examination revealed normal vision in both eyes and the right eye was able to take up fixation rapidly when the left eye was covered. Both eyelids had good functions. Surgery was perfromed under general anaesthesia to correct the squint, droopy eyelids (ptosis) and simultaneous creation of double eyelids. Post-operatively, the boy regained his confidence and the bullying stopped. 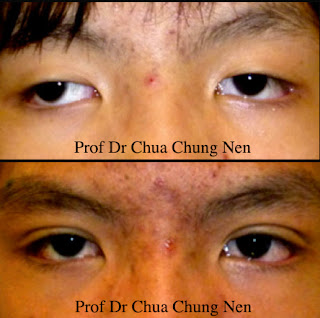