Doc, can Anything be Done about My Eye? Part 2

There are several ways of reconstructing the upper eyelid, some methods give a more natural looking result than others. The three commonly used methods are shown here. 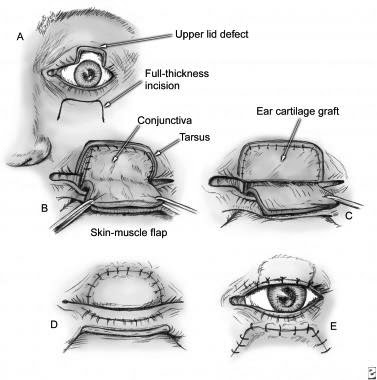 Cutler-Beard technique. This is often used following a large upper eyelid tumour excision.
The disadvantages are the absence of eyelashes in the reconstructed part and
some distortion of the lower eyelid.

In this method, the posterior lamella is first formed by using either
the tarsus from the lower or hard palate, the anterior lamella is formed
by using glabellar flap. The main disadvantage is that the skin of the forehead
is thick and give the upper lid a rigid appearance.

Lower lid switch. This method has the advantage of giving a more natural looking
eyelid as the eyelashes are transferred together with the flap to the upper lid defect.

For this patient, the best approach is the lid switch procedure. However, there is the problem of locating the levator muscle to allow the new upper eyelid from moving normally. This is also explained to the patient. 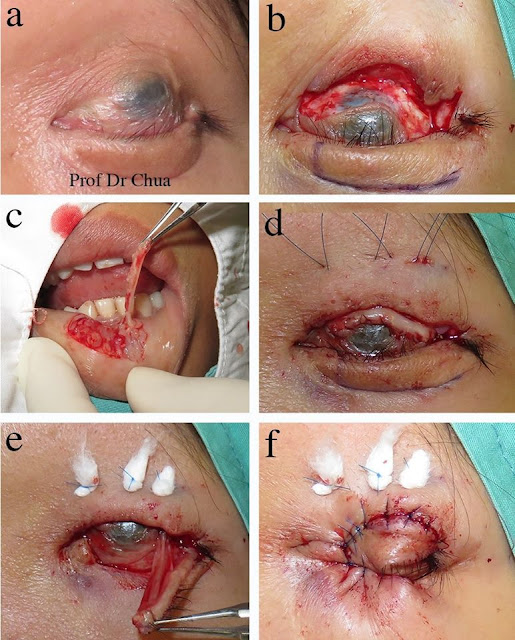 Lid switch procedure for partial cryptophthalmos. a. Before the start of the procedure; b. the upper part
of the eye where the upper eyelid is to be reconstructed is prepared to received the lower lid switch;
c. and d. Buccal mucosa is harvested to cover the raw surface of the upper eyeball and three 6/0 prolenes
are used to attach the upper end of the mucosa to form upper fornix. e. The lower lid switch is fashioned
and f. and attached to the upper part of the eye. This is left for two months to allow the upper part of
the eye from taking up the lower eyelid through formation of new vessels.