Mr Sam Lee of Birmingham Medical School alerted me to this piece of interesting news from Hong Kong. The news related a clown fish being operated on by a vet in Ocean Park. I think the news tied in nicely with my previous post and showed that it is not just human beings but fish that the place you live determines if you get proper health care.
The clow fish which was 4cm in length lived in Hong Kong Ocean Park and recently developed a large tumour in the right eye  (in human term it is like having tumour the size of an orange growing inside a pserson's orbit). The tumour caused the fish to lose its balance and problem swimming. The in-house vet decided to carry out a biopsy to determine the nature of the tumour. The fish was first anaesthetized  in a small tank containing anaesthetic solution before being taken out of the water. A small tube connected to the fish tank with constant water infusion was used to intubate the fish. The orbital region of the fish was explored and tissues were removed for histology. Postoperatively, the fish was given an injection of anaesthesia to control postoperative pain. According to the vet, if the result showed benign growth the tumour will be excised but if the tumour showed cancerous growth euthanasia would be carried out. 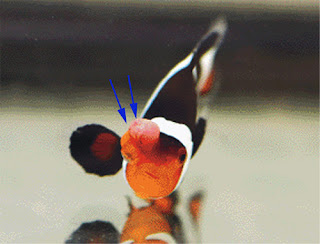 The blue arrows show the tumour of the right eye. 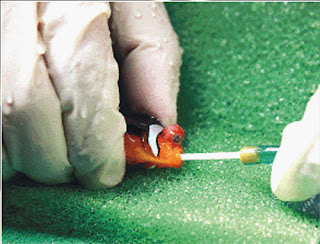 Once anaesthetized, the fish was intubated using
a fine tube connected to the fish tank. 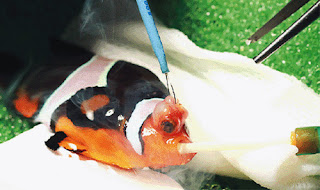 A cutting diathermy was used to explore the right eye. 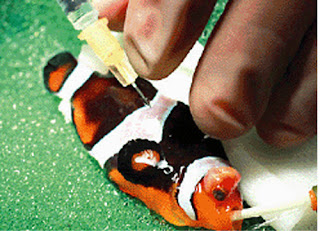 Anaesthesia was injected into the fish to reduce
postoperative pain.