Is Asian blepharoplasty (double eyelid surgery) similiar to Westernization of the eyelids?

In , double eyelid surgery or Asian blepharoplasty is the most common cosmetic  eyelid surgery performed amongst  people of Chinese descents. The purpose of the procedure is to make the eyes appear bigger and more animated without losing their ethnic identity. Consequently, it is a misnomer to call double eyelid surgery Westernization of the eyelids otherwise the results would be disasters as the end results will make the patient appear neither Chinese nor Caucasians because the shape of the eyes are the most distinctive parts of  Chinese faces. Westernization of the eyelids will make the skin creases too high and the eyes sunken. Using my basic photoshop skills, I use three famous actresses/singer to illustrate the points. Lucy Liu has the so called single eyelids and if she were to undergo double eyelid surgery, the surgeon who thought she want her eyes westernized may create double eyelids in the shape of Angelina Jolie. From the photoshop result, the result would be a disaster as she would appear weird with Caucasian eye and yet Chinese nose, cheek and mouth. On the other hand, a considerate and experienced surgeon will make her eyes appear bigger says in the shape of Wang Fei. The photoshop result shows she would retain her Chinese looks despite the double eyelids. 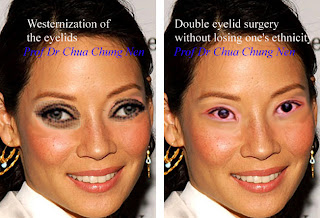 Unfortunately, some western surgeons who thought their Chinese patients want their eyelids to resemble that of Caucasians and may even display their results in textbooks as "successful" results. The pictures below are taken from two American textbooks on eyelid surgery under the chapters Asian Blepharoplasty. To most potential Chinese patients who wish to undergo double eyelid surgery, any surgeons who show these results are most unlikely to get any patients.

I will disuss more on double eyelid surgery later and show how I do the operation (with pictures).

The importance of retaining the Chinese features (at least in Malaysia) after double eyelid surgery will make or break the name of any surgeons. I think the same can be said about creating fuller lips with fillers. Most people would prefer fuller lips without ones that resemble Africans (Africanization of the lips), unfortunately some cosmetic surgeons give their patients the lips of Naomi Campbell!