What to do when you lose all your eyelids?

I have 5 eye operations today: one excision of multiple papilloma, three ptoses (one bilateral senile ptosis, one left ptosis and one congenital ptosis) and one lagophthalmos (for gold weight implantation). While reading oculoplastic books to update myself, I come across a chapter on reconstruction of both eyelids (in which the patients lose both eyelids) in the book Repair and Reconstruction in the Orbital Region by John Clark Mustarde and thought to myself that this is one operation I am unlikely to need to do in my practise. Most of us are fortunate to like in countries where war injuries resulting in severe facial disfigurements are rare. The majority of facial injuries we encountered are caused by accidents or assaults and most do not come near to the severity of war injuries. Total loss of eyelid would necessitate prolonged operation using skin tissues from undamaged parts of the body and this usually comes from the head region.

I google for pictures on total eyelid reconstruction and come across this fascinating series of pictures belong to a World War I victim called Walter Ernest O'Neil Yeo. He was reported as the first patient to undergo successful advanced skin grafts (I suppose the emphasis here is advanced which I take to mean extensive otherwise many patients before him would have undergone small skin grafts with success). In 1917 he was treated by Sir Harold Gillies - the first man to use skin grafts from undamaged areas on the body - and know as 'the father of plastic surgery'. The operation involved skin graft from neck using tubular pedicle. The skin removed from the neck was attached to the face and to ensure survival of the grafts, the remaining skin was rolled up and remained attached to the blood supply of the neck.

Although the postoperative picture appeared not better than the preoperative one, the patient's eyes are not protected by the new eyelids. Otherwise he would go blind from exposure of the eyes to the environment.

Final twist to the story relates to the surgeon not the victim. 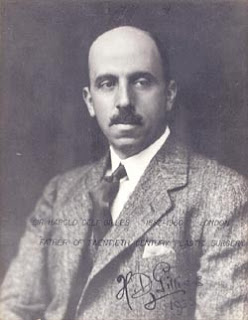 Sir Gillies found that his operation with tubular pedicle (green arrows)was so successful that he later used it to reconstruct penis in his practise in Harley Street for women who want to undergo sex change to become men! Of course the penis was created with the skin from the abdoman and not from the neck. The moral of the story is that a bit of lateral thinking can be healthy for your bank account ;).