iIn the Curious Case of Benjamin Button, the main male character was born old and grew progressively younger. Unfortunately, some young people are affected by cutis lax(elastolysis or dermatolysis) which make them two or three times older than their actual age except that unlikes Jeremy Button they don't grow younger. Plastic surgery is the only way to restore some of their youthful appearance.

Cutis laxa is a rare disorder caused by defects or destruction of the collagen  in the skin. It may be hereditary or acquired.  Its typical dermatologic characteristics are loose skin with folds and premature aged appearance. In addition, some patients may also show premature ageing of their body organs like the hearts and lunds. Below are three sufferers from China. There are less than 10 cases in the whole of China. 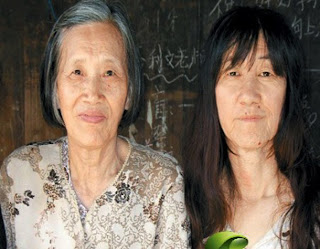 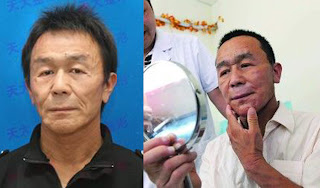 23 year-old man with the face of a 60 year-old. He underwent
a face lift to make him look younger but unfortunately
he is unable to regain the face of a 20ish.

A 29 year-with the face of a 70 year-old and after face lift.
Despite the extensive surgery, he still appears over 50.