Insanity has been defined as doing the same thing over and over again and expecting different results. In the following case, the insane one is the patient and the beautician the unscrupulous one.
This 15 year-old girl presented with multiple swellings of both upper eyelids along the skin creases. She underwent four double eyelid surgeries over the past 12 months. The procedures were performed by the same beautician in a bauty/hair salon over a two year period. However, each time the double eyelids failed to form and after the last surgery which was 9 months ago, she was left with unsightly lumps in her upper eyelids. The beautician was unable to offer any remedial treatment for the swellings and as expected told her that she got "special" eyelids which were not suitable for double eyelid surgery. 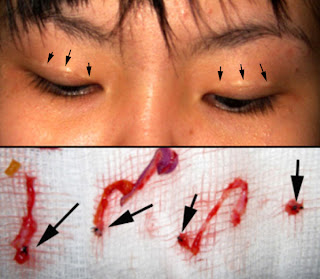 She became depressed and afraid to go out for fear people would see the lumps. To get rid of the lumps and at the same time create stable double eyelids, I perform the incision technique . The lumpy lesions were found to be caused by prolene sutures wich were placed repeatedly by the beautician in the hopeless attempt to create double eyelids. These sutures were excised and skin creases were created with a height of 7 mm. She made an uneventful recovery. 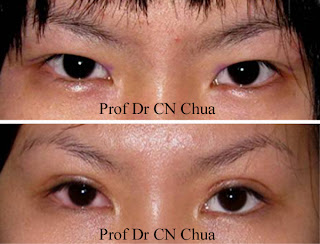 The eyelids before and after revision with the lumpy
lesions removed.