"You Can Now Meet the Visitors During the Chinese New Year."

I performed suture technique on this patient  one week ago who wanted to have double eyelids during the Chinese New Year but minimal down time. After spending the past 7 days hiding behind sunglasses, she returned for a check-up 3 days before the Chinese New Year. The double eyelids appear well-formed with minimal swelling and with a bit of make-up she looked presentable for the CNY. 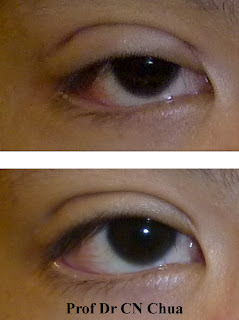 The top picture was taken the next day after
the procedure and the lower one week later.
Posted by Chua Chung Nen at 9:22 AM