A Patient who Can’t Close His Eye after Road Traffic Accident.

This young man was involved in road traffic accident in which he was a motorcyclist. There was substantial loss of eyelid skin and he was referred to the plastic surgeon who performed skin graft using post-auricular graft. Unfortunately, there was shrinkage of the grafts resulting in upper and lower eyelid contracture. The patient was referred to my clinic for further treatment. On examination, the patient had severe lower eyelid contracture resulting in eversion of the lower eyelid (cicatricial ectropion) which interfered with eyelid closure and caused constant watering. 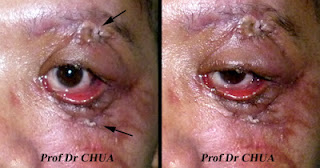 Severe eyelid contracture interfering with lid closure (right).
Arrows show shrunken grafts.
As there was also skin shortage in the upper lid, I performed a nasojugal flap. He was able to close his eye better at 3-week follow-up. 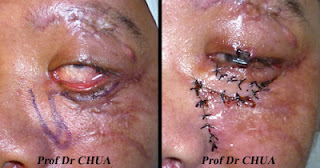 Marking of the flap before surgery (left) and at the end of surgery (right).
The eyelids were tied together for one week to minimize flap contracture.

Diagrams showing how the procedure was performed. 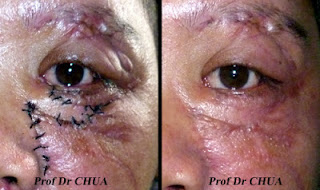