Right droopy eyelid before and after surgery.
Ptosis refers to droopy eyelids and it is usually caused by weak muscle that open the eyelid. Most cases occur in older patients but it can also occur at birth in which case it is known as congenital ptosis. Ptosis needs special attention as it can cause lazy eye and further more children with significant ptosis often suffer from emotional stresses as they are soft targets for bullying. This girl had significant ptosis since birth but her parents did not seek help believing this was only a small blemish. However, the significant ptosis had produced poor vision in the right eye and she had low self-esteem and was socially withdrawn. On examination, she had very poor muscle function and so the best option to treat her ptosis was with frontalis suspension in which the forehead muscle was recruited to lift the eyelid. The technique is as shown in the series of picture below and took between 15 to 20 minutes to complete. 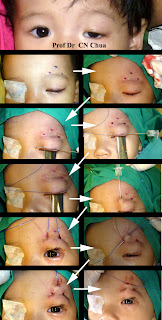