Doc, Could You Balance My Eyes for the Festive Season? - Part 3

The patient returned on the sixth day of the Chinese New Year for correction of the ptosis. A posterior approach conjunctival mullerectomy was performed.

The pictures below show the steps taken during the ptosis correction: 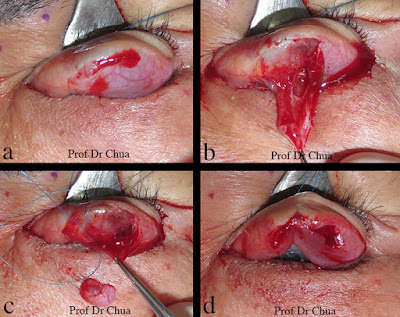 a-d. Excision of 10mm of conjunctival muller complex followed
by suturing of the stump of the complex to the tarsal plate.

The principle of the operation is shown diagrammatically below: 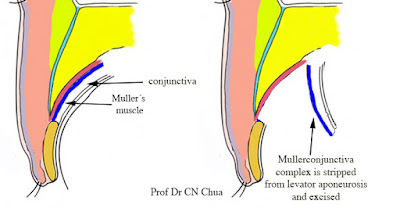 Picture on the left shows ptosis due to dehiscence of the levator;
picture on the right shows creation of a strip of conjunctival muller muscle complex. 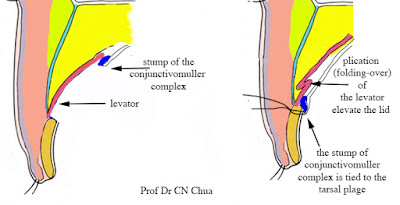 Picture on the left shows excision of the strip of the complex leaving behind a stump;
picture on the right shows suturing of the stump to the tarsal plate causes plication of
the levator muscle thereby elevates the lid.

One hour postoperation showing correction of the ptosis but the eye was still
droopy due to the effect of the anaesthesia and postoperative swelling.

One day postoperation showing a slight left ptosis correction but this usually
resolves within two weeks. There is delayed ecchymosis which is common
in old patients with loose skin and usually disappears within one week.

Appearance of the eyes at 6th day postoperative showing resolution
of most bruises.