Skin Cancer Around the Eyes

Althought I am an eye doctor who subspecailizes in eyelid surgery, I am often referred cases involving areas outside the eyelids. This patient has a non-healing ulcer on his nose which has increased gradually over the past 6 months. The biopsy reveals this to be a basal cell carcinoma. If left untreated this cancer can destroy the tissues and even death. The treatment of choice is excision of the skin with good margin to ensure complete clearance of the tumour. The defect is then reconstructed using nearby skin such as the face or the forehead. In this case, the defect was covered using a glabellar flap. 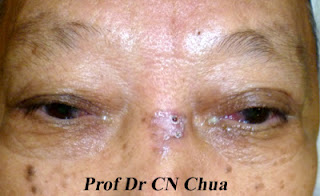 A non-healing ulcer of the nasal area. 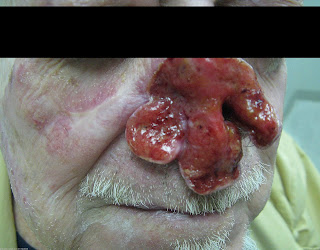 Destruction of the nose if the tumour were left
untreated.

The tumour is marked with free margin to ensure
adequate excision of the tumour.

A glabellar flap is fashioned to covered the defect.

The forehead wound is closed directly with silk.
The flap is thinned before used to cover the defect.

The defect is covered and the flap is trimmed
to ensure  a good covering. 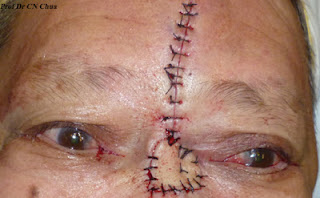 At the end of the surgery, the stitches are left
for two weeks.
Posted by Chua Chung Nen at 9:28 PM