A Phoney Surgeon on the Loose

With the approaching Chinese New Year, many women like to look their best on the festive season. Unfortunately, it is also the best time for unscrupulous people to make a quick buck by posing as doctors. Many of these phoney doctors collude with beauty centres to get unsuspecting customers for various operations under unsterilized conditions. Worse yet, many of these operations were badly performed and when the victims try to have the complications rectified these phoney doctors have disappeared into thin air.

This month I came across two such cases performed by a phoney doctor. The victims had thread lift performed in the same beauty centre by the same person who claimed to be a doctor. However, he refused to give away any name card or his surgery address. I thought this should have raised the alarm bell but the patients were persuaded by the beauty owner to part with over 4000 ringgits each for the procedures.

In a thread lift (see figure below), barbed threads are used to lift sagging eyebrows and deep nasolabial folds (the furrows between the nose and the corners of the mouth) or aging neck tissues. Although thread lifts have decreased in popularity becuase their effects are not lasting, in proper hands they can still be a useful tool. 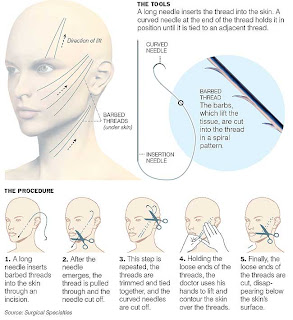 This woman had double eyelids and thread lift performed to lift her right eyebrows. The doubel eyelids were badly formed and there was an abscess in the right upper eyelid. She had pain each time she open her right eyes. The phoney surgeon could not be contacted. On examination, there was a hard mass. Surgical exploration showed the thread lifts had been badly placed resulting in constant irritation to the eyelid with each opening and shutting of the eyes and hence the abscess formation. The thread lifts were removed in total.

The thread lifts removed from under the abscess.

A woman underwent thread lifts to lift her sagging jaws. The sites where the thread lifts were passed were poorly sutured and the thread lifts were protruding (see arrows in the pictures below). There was pus oozing from the wound as well as bleeding. Again she tried in vain to contact the phoney surgeon. However, the owner of the beauty saloon, seeing the serious nature of her complications asked her to see a proper doctor immediately. The wounds were cleaned and mutiple pieces of thread lifts and sutures were removed. Recontruction was needed to close the wounds after draining off the pus.

Severe inflammation with abscess formation after
poorly performed thread lifts. The left pictures
show the extent of the wounds after
removing the thread lifts and sutures. 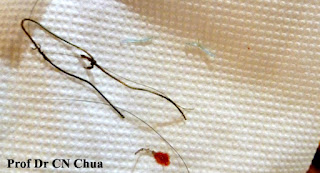 Some of the sutures and thread lifts
removed from the wounds.