Doc, Can You Straighten My Eye? II

The eyes are the centre of attention during face-to-face interaction. Therefore, any imperfection of the eye like squints are immediately apparent. Squint affects about 1% of the population and can adversely affect other people's perception of the person. These two young persons were bothered by their squinting eyes since young but did not seek treatment until now. As they also narrow eyelid opening, double eyelid surgery was combined with the squint surgery. The operations were performed under general anaesthesia. 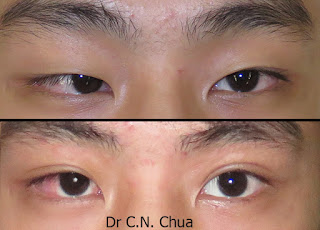 Right in-turning eye and narrow palpebral aperture (right more than left).
The in-turning eye was corrected and double eyelids created simultaneously.
The picture was taken 2 weeks after the operations. The patient had a
mild right ptosis as noted before the surgery. 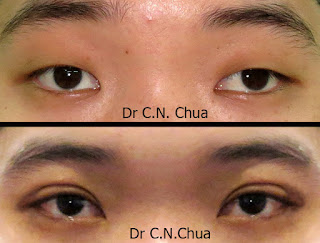 Another person with left out-turning eye. Correction of the squint was done with
double eyelid surgery at the same setting. The postoperative picture
was taken 2 months later.