Excision and reconstruction of a Lower Lid Lesion

This man was concerned about his lower eyelid xanthelasma which had troubled him for the past 10 years and had got bigger. He had tried trichloroacetic acid and laser treatment but without success. The lesion was excised closed to the margin and a rhomboid flap was used to cover the defect.
(Special thanks to Dr Ho Shu Fen, Dr Chin Ong and Dr Andy Yew for assisting the operations and taking the pictures). 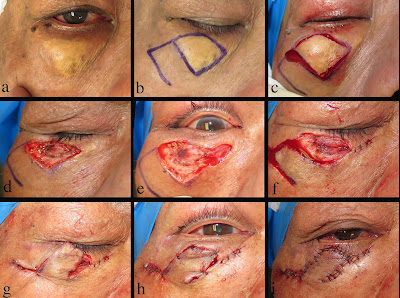 Steps showing the excision of the xanthelasma and use of rhomboid flap to cover the defect. The main concerns in this procedures are lower lid ectropion (eversion of lower lid) and scarring. The former requires the use of flap that does not cause too much tension on the lower lid margin and the later needs meticulous suturing technique to minimal scarring.