2800 Year-old Technique that Stands the Test of Time

As an oculoplastic surgeon, I use various techniques to reconstruct the eyelids and surrounding areas. It is interesting to know that many of these techniques have been in use for centuries and some milllineum. A recent article in the news is a case in point.

This unfortunate woman had her nose hacked off  by a violent spouse 32 years ago. With the help of an organization that helped aboused woman, her nose reconstructed using skin from the forehead. Nose cutting used to be a common punishment for women who committed adultery. In the 21st century, most of the cases of nose lost in civilized countries occur in accidents but mutilation is still common in some less developed countries as a form of revenge by a jealous lover or husband. 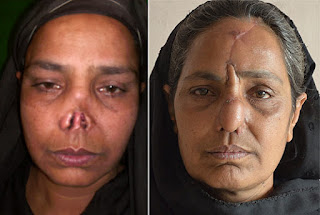 This technique of using forehead skin (paramedian forehead flap) had been in use in India since 800BC and was attribuated by Sushruta, an ancient Indian doctor widely regarded as "father of surgery". The mannique below was from 19th century Europe for teaching this technqiue. This procedure is also popular known as Indian flap. 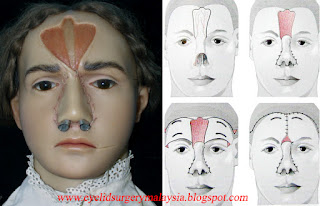 Mannique for teaching nose reconstruction
and the steps involved.

"The love of life is next to the love of our
own face, thus the mutilated cry out for help."
-Sushruta-