Unequal double eyelids may be mistaken for droopy eyelids. 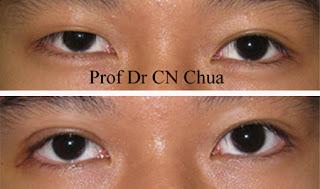 Right eye appears to have droopy eyelid due to poorly
formed double eyelid. Creation of double eyelid balances
both eyelids. 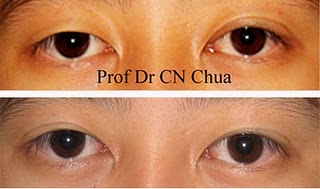 Right eye appears droopy due to absent double eyelid.
When the double eyelid is created with tape the two
eyes appear the same size.

Below is the article which I recently published in Malaysian Journal of Medicine highlighting this condition:
Challenges in Diagnosis and Management of Pseudoptosis Secondary to Asymmetrical Skin Creases
Posted by Chua Chung Nen at 7:17 PM