The suture techniques for double eyelid formation (Asian blepharoplasty) is one of the commonest and the simplest aesthetic eyelid operations in the Far East. While I mentioned simple, it does not mean that the procedure should be performed by any lay persons without medical knowledge, sterile environment or careful patient selection. Many persons underwent the procedures in beauty saloons by self-taught unlicensed personnels with unpredictable results. Those who had botched jobs do not where to turn and the persons who did the operation usually denied any responsiblities. However, in experienced hands with careful patient selection the procedure can be satisfactory for both the doctors and the patients. 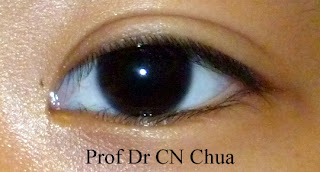 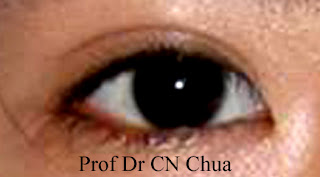 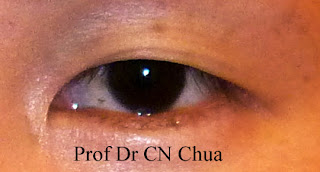 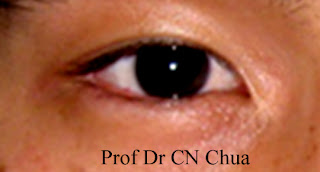 The purpose of the procedure is to obtain an aesthetically pleasing double eyelids. The advantages of the suture techniques over the incision techniques are:
a.  less postoperative swelling;
b. the double eyelid can be removed by cutting and remove the stitches (at least at the early post-operative stage) if the patient desires to return to the preoperative state
c. the scars are minimal.

The double-eyelid creation depends on the mechanical strength of the suture between the subcutaneous tissue and the levator aponeurosis (the muscle that open the eye) or tarsal plate. Many factors are believed to play a part in the success of the suture technique which include the number of stitches, the methods of suturing (more on this in later blog), and more importantly the eyelid of the patients. Patients who had puffy upper eyelids are usually unsuitable for the suture technique because they usually have excess subcutaneous fat that prevent adequately adhesion between the subcutaneous tissue and the levator or tarsal plate. 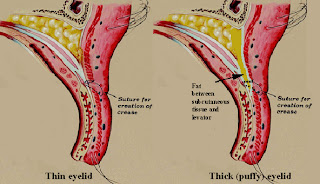 Diagram showing suture technique in thin and thick eyelid.
The fat in thick eyelid will prevent adequate attachment of
the subcutaneous tissue to the levator or tarsal plate.