Ptosis may present as multiple and indistinct double eyelids 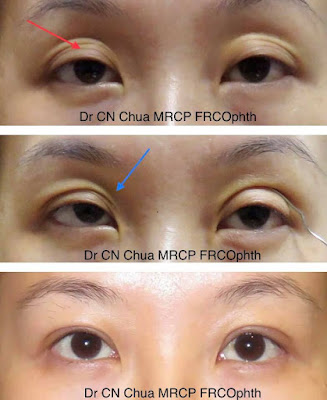 Although patients with ptosis usually complain of droopy eyelids or tired looking eyes, some may present with multiple skin creases (double eyelids, red arrow) or sunken upper eyelid (sunken sulcus, blue arrow). It is important for doctors to detect Ptosis in such patients otherwise double eyelid surgery or filler injection may exacerbate the ptosis. This patient who was a contact lens wearer complained her natural double eyelids (skin creases) were faints and multiple (top picture). She asked for double eyelid surgery. However, examination showed she had bilateral ptosis and creation of double eyelids would only make the eyes more droopy and tired (middle photo). Posterior approach ptosis correction was done and the patient was happy that she looked more alert and the multiple skin creases and sunken sulcus were also corrected (bottom picture taken one week after ptosis correction).

Posted by Chua Chung Nen at 9:30 PM No comments:

This patient also had contact lens induced left ptosis (droopy eyelid, top picture). Correction of the left ptosis resulted in droopy of the right ptosis which alarmed the patient (middle picture taken at one week after posterior approach ptosis correction). Two main factors may be responsible for this phenomenon: a. The patient had ptosis in both eyes with one eye being more severely affected. Therefore, successful correction of one eye will bring out the contralateral ptosis. b. The ptotic eye was overcorrected resulting in the opposite eye becoming droopy. However, most oculoplastic surgeons usually overcorrect droopy eyelid slightly so that any drop of the eyelid during recovery will be compensated.
As this patient did not have right ptosis before the operation, the most likely cause for the imbalance is factor b and she was reassured. At 6 weeks follow-up the two eyes were nearly symmetrical (bottom picture). 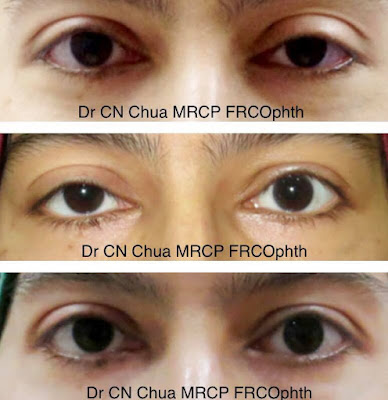 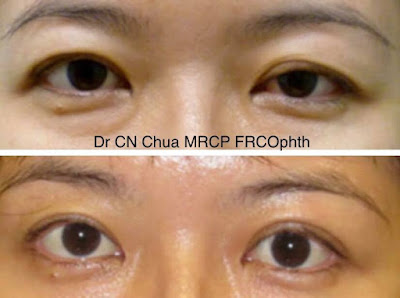 Another patient with contact lens induced ptosis. The left ptosis was also corrected with posterior approach correction which is the preferred method as the down time is minimal. The bottom photo was taken 5 days after the operation. 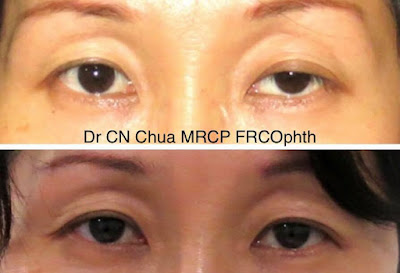 Contact lens wear (both hard and soft) is a known risk factor for Ptosis (droopy eyelid) in people under age of 35. The reasons may be : a. Stretching of the eyelid during contact lens insertion and removal and b. Low grade inflammation from contact lens may weaken the eyelid structure. This 35-year-old woman had been a contact lens wearer for over 20 years in the past 2 years she noticed the left eye had become progressively more droopy. Examination showed no neurological causes and a posterior approach ptosis correction restored the lid to the desirable level (bottom picture taken at two weeks post surgery). For more information, click here for contact lens induced ptosis
Posted by Chua Chung Nen at 9:02 PM No comments: 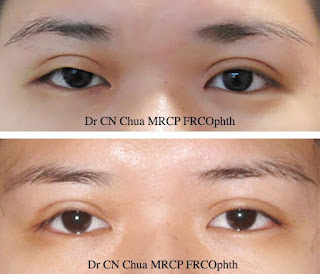 This young woman had double eyelid surgery performed in a beauty saloon by a visiting China “doctor” . Postoperatively she noted the right eye to be droopy in the medial two third of the upper lid. She returned to the “doctor” and was reassured that it will correct itself in a few months. But the droopiness persisted. When she returned to the beauty saloon, the owner of the centre told her the “doctor” would not return and asked her to see the new visiting “doctor”. The later told the patient that she was unable to correct the droopy eyelid and asked her to seek help in “proper” medical centre. On examination, she appeared to have damage to the medial 2/3 of her levator aponeurosis. Posterior conjunctivomullerextomy was performed with good outcome (bottom picture taken at one month postoperative).
Posted by Chua Chung Nen at 9:13 PM No comments: