A Patient with Upper Lid Swelling from Unknown Filler Injection

This man had had injection to his upper lid in a beauty saloon with an unknown filler resulting in upper eyelid swellings and occlusion of his visual fields. Examination revealed severe puffiness and hardness of the skin. Hyalase (enzyme to dissolve hyaluronic acid) was injected but the swelling failed to resolve suggesting some sort of permanent filler such as silicone might have been given.
He underwent upper blepharoplasty with removal of the skin, fat and repositioning of the lacrimal glands.

Proposed height of the skin crease was shown to the patient.
Black arrows shows prominent puffiness of the lateral upper
eyelids indicating there may also be lacrimal gland prolapse.

The skin to be excised was marked and the skin crease was set
at 5.5mm (Note: in male, the desired skin crease should be
not more than 6 mm to avoid feminization of the eyes) 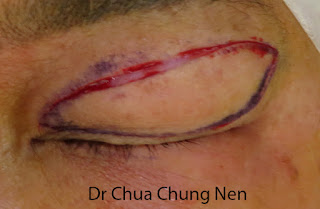 The marked area was incised. 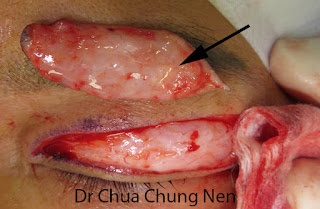 The under surface of the excised eyelid showed the filler
as shinny substances (arrowed). 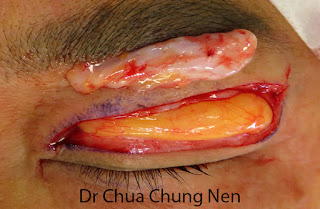 The orbital septum was removed to show the fat. 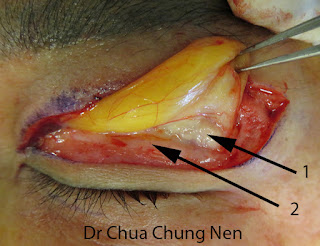 The lacrimal gland (1) and levator aponeurosis (muscle that
open the eye, 2) were found below the fatty tissue. 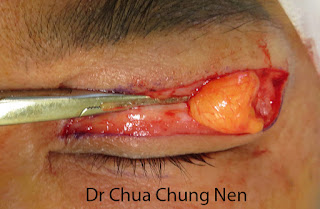 The fat that formed part of the upper lid swelling was excised. 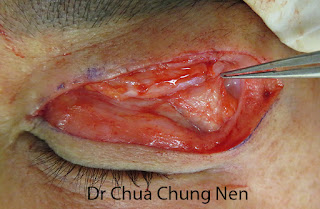 The lacrimal gland contributed to the lateral puffiness. Removal
is not recommended as this may cause dry eye. 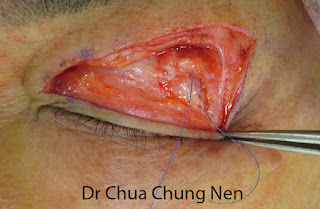 Instead the lacrimal gland is repositioned using 5/0 ethilon
to the orbital roof. 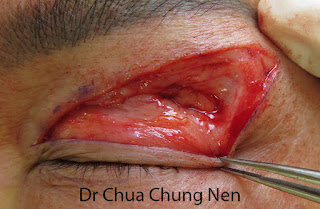 The lateral puffiness was abolished after lacrimal repositioning.

At the end of the surgery.

Posted by Chua Chung Nen at 9:58 PM No comments:

A Patient with Headache and Blurred Vision.

This patient who had had cataract surgery 5 years ago complained of increasing blurriness of vision and headache. Examination did not show any opacities of the posterior capsule or any retina diseases, however, refraction showed high astigmatism of 2.00 D. In addition, she had excessively high eyebrows. The symptoms were attributable to droopy eyelids: astigmatism can occur when the droopy eyelids press on the globe and the headache due to constant use of the forehead muscle to elevate the eyebrows in an attempt to open the eyes.
After consultation, bilateral ptosis (droopy eyelid) surgery was done using the posterior approach. After the operation, her vision improved due to reduction of the astigmatism to -0.75 and the headache disappeared when the eyebrows returned to normal height. 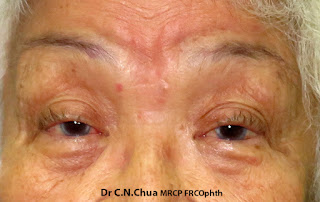 Headache due to constant excessive use of forehead
muscle to open the eyes. 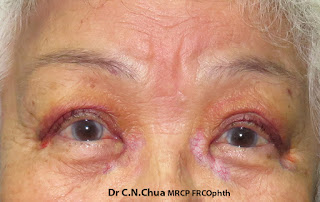 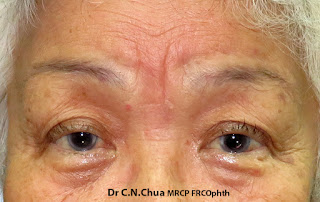